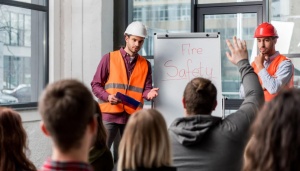 When you’re a college student, you probably share a space in some form or another with other people. This can include being in a dorm or an apartment building.

While that’s part of the quintessential college experience, it can have downsides.

For example, you’re at risk because of things other people do. If there’s a fire, it can be out of your control, but there are things you can do to keep yourself safe in this situation. There are also preemptive steps you can take to avoid being someone responsible for a fire in your building.

The following are things to know about fires in a dorm or apartment, especially if you’re a college student.

If you live in a shared space, you want to make sure that you have fire alarms on your floor. If you don’t see them or aren’t sure, talk to the RA or apartment manager. It’s their responsibility to ensure there are working fire alarms on each level of a multi-story building.

These alarms should also be outside every sleeping area and in every bedroom.

Talk to the person who’s in charge onsite and figure out when the last battery test was.

There should also be fire extinguishers available on each level of your apartment and, if applicable, in the kitchen.

Proactively you also need an escape plan. Think about what your route will be and give yourself different options.

When you live in a multi-unit residential building of any kind and you’re living close to other people some of the most significant fire risks include:

A few other fire safety tips include:

So what should you do if your building is actually on fire?

If you hear a fire alarm, you shouldn’t ignore it. You should get your room or apartment keys and let the people around you know as much as possible. It’s essential to take your keys in case you have to turn around because of any flames in the hallway or smoke, or a blocked entry. You may need to go back into your apartment.

Begin to act right away, but try to stay calm. If you’re on your bed, roll-off and crawl to the door. Remain low in case there are fumes or smoke.

Check doorknobs before opening them. If there’s heat that you can feel on the doorknob, it can indicate there’s a fire behind the door.

If there’s an elevator, don’t take it.

If you can’t leave, stay where you are. This means that your apartment isn’t immediately threatened. You can put wet towels or rags under your doors and cover the vents to prevent smoke from coming in. Call 911, and open a window to wave a brightly colored cloth or towel outside the window. If possible, you might use a flashlight as a signal.

If you have to escape through smoke, along with staying low, you should close doors behind you.

If you have a window, don’t break the glass unless you have to because it can draw the smoke in from the outside.

If you see a small fire somewhere in your building and you’re comfortable doing so, you might be able to use a nearby extinguisher.

You should not enter a smoke-filled room, even if it doesn’t look like there’s any fire.

Other key takeaways in the event of any kind of fire include:

When you live in a shared building with other people, it’s so crucial that you’re proactive about fire safety. You might not think about it until it’s too late. It could save your life to know what your escape plan is.

If you’re on a high floor of a building, you might even invest in an escape ladder.

There are just so many variables around you when you’re sharing this kind of space with other people, and there are many things out of your control.

If you have any concerns about fire safety in your building, whether it is a dorm or an apartment, talk to someone who’s in charge about what those are and what you think can be done.