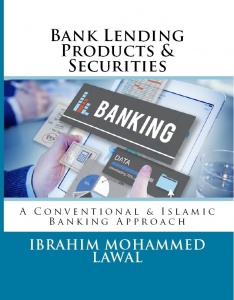 Islamic banking is considered as an alternative to the conventional form of banking system as it provides financial services in accordance with the shariah. The adoption of this form of Islamic banking is gradually taken the centre stage in the parlance of the financial world. This book tries to explore comprehensively both the Islamic and the conventional banking approach in relation to bank Lending products and securities (Collateral). This book is divided into ten chapters. Chapter one sets out to give an overview of the conventional banking system where its origin, definition and its various types was discussed. It also introduces the concept of lending as well as highlighted the various cannons that govern lending. Chapter two discusses the major lending products that are obtained in the conventional banking system such as overdraft, import overdraft, import and export finance facility, foreign currency loan, letter of credit confirmation line, invoice discounting facility, local purchase order, term loan, direct credits, leases, loan syndication, specialized loan. The chapter ends by also highlighting some of the retail loans. Chapter three proceeded by introducing the concept of security (collateral) its various features in order to ascertain when a security is good or not. The chapter ends by highlighting some of the benefits attached when obtaining security (collateral) when it comes to lending. In chapter four, the various forms of securities that are acceptable by conventional banks was also discussed. Amongst which are land, debenture, stocks and shares, life insurance, cash deposit, guarantee. Other types of securities were also mentioned such as equipment lease agreement, assignment of debts, factoring, bonds and money market instruments. The concept of Islamic banking was introduced in chapter six, its origin and its current performance in the various regions of the world was discussed. The chapter ends by discussing further the principles that are guiding the operations of Islamic banking. Chapter six sets out to examine the various sources of funds that are available for the smooth operation of its activities. Basically the sources that are avaibale internally and externally was mentioned. Chapter seven dwells deeply on the various lending modes that are obtainable in Islamic banks. Amongst which are Murabahah, Musharakah, Mudarabah,, Ijarah, Istisna’a, Tawarruq, Bai-salam etc. Chapter eight focuses on security in an Islamic perspective. Its types in islam and also discussed the position of security in Islamic banking on whether it is acceptable or not. Chapter nine discusses the various forms of securities that are acceptable by Islamic banks which was discussed based on an Islamic approach. Amongst which are land, debenture, stocks and shares, insurance (takaful), cash deposit, guarantee, Islamic Bond (Sukuk) other types of securities were also mentioned such as Ijarah lease agreement, assignment of debts (Hiwalah), and factoring, Islamic money market instruments. The book ended by examining the difference and the similarities between Islamic banking and the conventional banking.

To make an order: