Home / IISTE News / How to Start a Movement

Social movements have the potential to change the course of history, but many of them begin in very unexpected ways. The rise of social media has also revolutionized the way that many campaigns spread.

If you want to help bring a movement to life, consider these tips and learn from other recent successful campaigns.

What is a Movement?

To know how to create a successful movement, you first need to understand exactly what a movement is. A movement is an organized group of people with a collectively acknowledged pursuit toward a specific change they want to happen, for example: culturally, politically, or socially.

They can vary in size and scale. Some relate to a specific city or town while others gain national or even global attention.

What Makes Something Catch On?

It is fascinating how some unexpected things catch on and go viral, while others fizzle out rather quickly. It is nearly impossible to predict with perfect accuracy what will go viral, but most successful movements have several things in common.

In Jonah Berger’s New York Times bestselling book Contagious, the Wharton professor describes six attributes that help things to catch on: social currency, triggers, emotion, public, practical value, and stories. He describes these features as STEPPS and lays out in detail how each is effectively used in marketing plans.

Understanding Berger’s analysis is a great place to start to fully understand what makes up a movement. If you want to start a movement for yourself and really make it stick, then you should definitely check out How to Start a Movement. Strategy, Powerful Psychology, Drivers & Tactics. 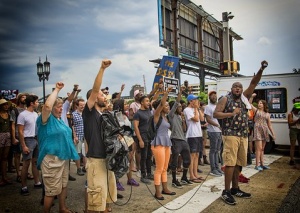 Now that you understand a little bit about the mechanics of movements, here are some examples of movements that caught on in the last few years. It is clear from how they started out why they caught on and grew quickly.

The Me Too movement proves to be an interesting case because it was actually first started ten years before it became well known. Tarana Burke first used the hashtag in 2007, but suddenly it was all over the place in 2017. One reason for this was the high-profile Harvey Weinstein and Larry Nassar sexual assault cases that brought national attention to the prevalence of sexual violence.

Black Lives Matter, in a similar way to Me Too, was also brought to light by tragic events. In this case, it was the deaths of unarmed black people at the hands of police officers. Specifically, three activists, Alicia Garza, Patrisse Cullors, and Opal Tometi, created the movement after Trayvon Martin’s killer, George Zimmerman, was acquitted. These injustices galvanized people throughout the United States to pursue action and change.

The name of this organization even sparked counter-movements that used hashtags such as All Lives Matter and Blue Lives Matter. This movement’s verbiage was specific and direct, which also made it controversial for some and furthered its notoriety.

The No Ban No Wall hashtag on Twitter became very popular after President Trump made decisions to enact a Muslim travel ban and construct a wall on the United States-Mexico border. People felt strongly that these actions were anti-immigrant, immoral, and unconstitutional. Taking to the social media platform they made their voices heard.

All three of these campaigns were effective in shedding light on societal issues that previously were not frequently discussed.

Movements come to fruition in many different ways, and as long as you have something to say that resonates with others and ways to spread your message quickly, you have the potential to create a movement of your own.